After a brief look at news and current events we go Madrid's Teatro Real, the Royal Opera House, where on June 15th the VII edition of the charity concert "Acordes con solidaridad" (chords with solidarity) will be given. This annual event is organized by Spanish NGO Ayuda en acción (aid in action) to raise funds for its educational projects for children and youths in Spain who face marginalization due to poverty. We talk to one of the directors of Ayuda en acción, Marta Marañón, and also to Spanish conductor Pablo Heras-Casado, who has conducted these benefit concerts from the start. This year's concert features the music of Manuel de Falla (his ballet in one act "El amor brujo" (love the enchanter)) as well as that of Maurice Ravel and Gabriel Fauré. Flamenco cantaora or singer Marina Heredia will--like Maestro Heras-Casado and the members of the Madrid Symphony Orchestra--be performing free so that all proceeds can go to the more than 80 projects Ayuda en acción is carrying out across Spain. And of course, our broadcast offers a taste of the music that will be heard at the "Acordes con solidaridad" charity concert: a recording of "El amor brujo" by Marina Heredia accompanied by the Mahler Chamber Orchestra under the baton of Pablo Heras-Casado. 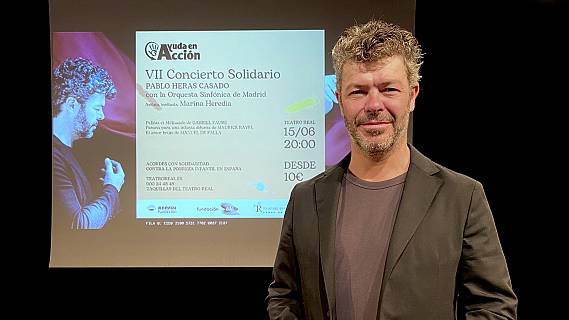